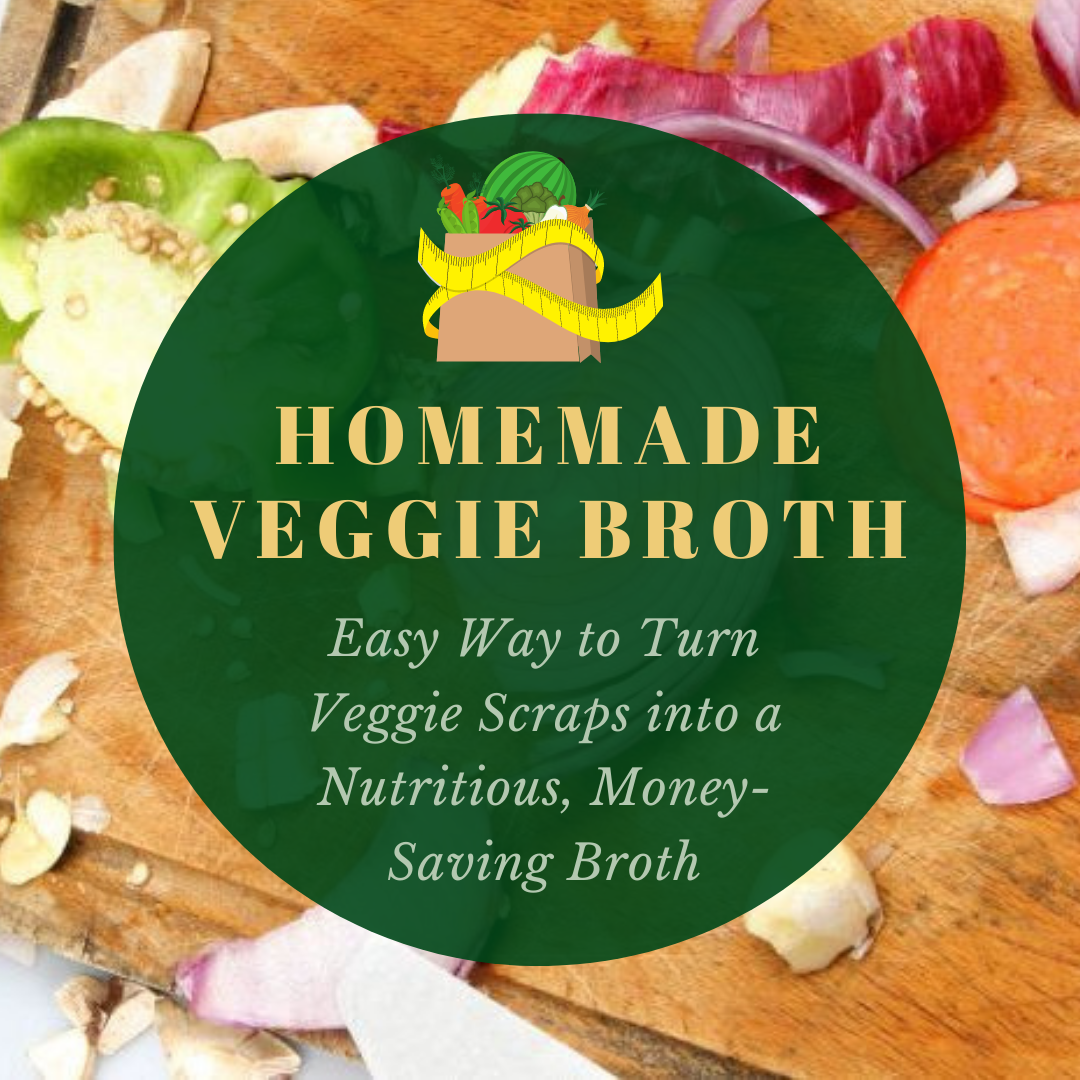 While you are doing your day-to-day cooking every week, you accumulate a LOT of food waste. From cutting off any bad bits to the excess pieces you aren’t eating in that meal (like carrot tops, onion skins, and potato skins), we end up with all those extra scraps. Most people in America throw those scraps in the trash and they end up in a landfill. Hopefully you are already compost those scraps, but if not we’ll be posting about easy backyard composting soon! But, before you compost those scraps, we would like to suggest making your own veggie broth with it! This is a super simple process and helps you save money and add nutrients and flavor to your dishes. Here’s how our Director of Operations & Development, Christine, uses her veggie scraps to make broth once or twice a month! 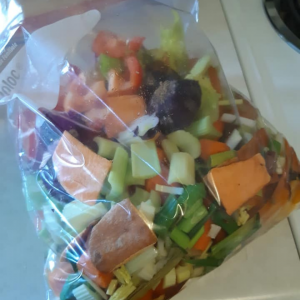 While I am cooking meals throughout the week, I re-direct some of my scraps from the compost pile and instead store them in a zip-loc bag in the freezer. These are things like the skins or ends of veggies I’ve prepped or veggies that are about to go bad (like if I sliced up bell peppers to snack on and didn’t finish them all but don’t have enough for some other dish). Once that bag is full, it is time to make broth!

There’s no real right or wrong veggies to keep for stock, so long as you aren’t using something that is moldy. You can add pretty much anything to it, but it will create different flavor profiles. I always make sure that the bulk of my scraps consists of carrots, onions, and celery. I also like to have sweet potato skins, bell pepper pieces, and mushrooms. Some people like to add tomatoes, but I’m not a fan of the flavor it adds. I also try to avoid adding too much of things like carrot tops, broccoli stems, cabbage leaves, and brussel sprouts as they can make the broth bitter if used in excess. Lastly, if I don’t have any scraps I like to add some ginger root, turmeric root, and garlic cloves. These add so much flavor and amazing nutrients for immunity and overall health. I cook with them a lot, so I usually have scraps, but if I don’t I find it is worth it to chop up some fresh ones for the stock! 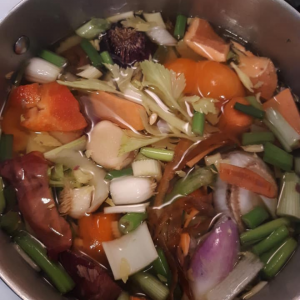 Step 2: Cover Veggies with Water and Bring to a Boil

It’s really that simple. I find that a full zip-loc bag almost fills up my stock pot and then I just fill it with water up to the top of the veggies. Done. I often add a little salt for flavor, but if you have a lot of herbs in there or you are trying to cut back on salt, it is definitely not necessary. When I went to take pics for this blog I actually had no fresh turmeric so I also added some turmeric powder. I just can’t make broth without it! You could also add some sage or other fresh garden herbs if you have them on hand! When you pot is full of the veggies and water just put it on the stove and bring to a boil. 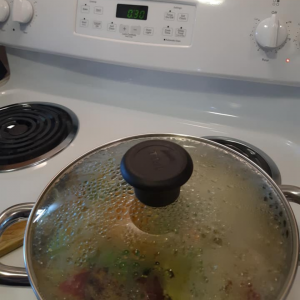 Once the mixture is boiling you are going to want to turn the heat down so it doesn’t boil over. Cover it and then let it simmer for at least 30 minutes. The longer you simmer it the better though as it will draw out more of the nutrients and flavor from the veggies. I generally set my timer for 30 min and come back in when it goes off and start getting everything else ready that I’m working on, therefore it cooks for about 40-45min. 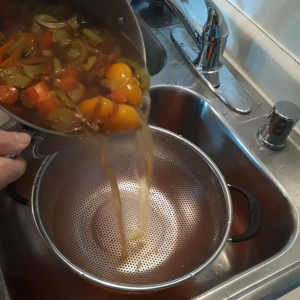 Step 4: Strain the Scraps and Collect the Broth

Set a bowl in your sink with a strainer in it and then dump the contents in to separate the broth from the veggie scraps. Don’t. Forget. The. Bowl. You would think that is obvious, but I once put the strainer in the sink without a bowl and poured an entire stock pot of broth down the drain right before a dinner party. You do it once and you’ll never do it again! At this point, you can transfer the veggie scraps to the compost bin. 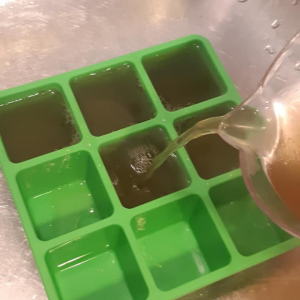 If you aren’t using the broth right away for a dish, you’re going to need to store it. I usually keep a little out in the fridge for use that week and the rest I freeze. In the fridge, broth is only considered safe for 5-7 days. I’ve definitely used it later than that with no problems….but do what I say and not what I do! Usually, I freeze my broth and my preferred method is to do it in ice cubes! These silicone trays in my pic were purchased at Target several years ago from the canning section, intended for freezing oils and butters. I’ve seen these cube trays in several versions at popular stores and online and I like them because they are a bit bigger and very easy to pop the cubes out. And, 3 cubes = 1 cup exactly! So I can easily just toss the cubes into my pot still frozen and keep the ratio right for cooking my rice or quinoa.

I don’t like to keep the broth cubes in the silicone too long though as it stains the trays and the lid does’t fit well so they fall out if shuffled. So I just toss them in another zip-loc (you can use any storage container you like, really. I know need to phase out my zip-loc use eventually to curb the single use plastic, but I use these bags till they are DEAD at least and just keep washing and re-using for cubes or scraps!)

Do you have other ways you like to make your veggie broth or interesting ways you cook with the finished product? Comment below or tag us on social media and let us know! We love hearing from you and trying new recipes!