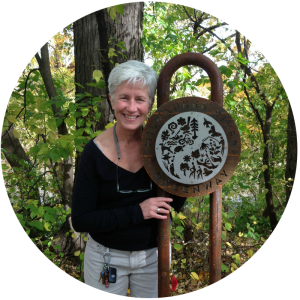 Ann Brummitt is currently a Co-Executive Director of the Victory Garden Initiative in Milwaukee Wisconsin.  Ann co-founded and directed the Milwaukee Water Commons, a group devoted to marrying issues of social and racial justice to water care. Prior to this position Ann was the Director of the Milwaukee River Greenway Coalition, founding the Coalition in 2006. Ann is a strong facilitator and coalition builder, working to help diverse groups achieve powerful outcomes. Ann served on the Board of Directors of the Milwaukee Environmental Consortium and All Hands Boatworks.

Last summer and fall, Ann and her partner traveled the Yukon, Alaska and the West Coast in a DIY van before settling back down to life in Milwaukee. 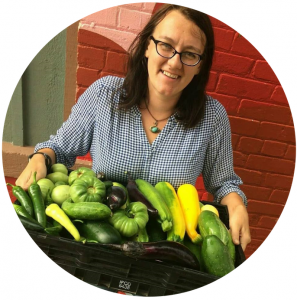 A naturalist by training, a gardener by happy accident, and a home cook by tremendous trial and error, Christine joined VGI in May 2018 where she was in charge of planning and implementing the Youth Education & Farm Programs. After 2 years of strengthening these programs Christine stepped into the role of Co-Executive Director alongside Ann.

Having grown up in central Wisconsin potato country, she was surrounded by food production from a young age. But like many kids, she wanted nothing to do with that small-town life so pursued adventure in college, trekking across the world to study global environmental issues in New Zealand and Australia, wildlife ecology in South Africa, and global food systems in Costa Rica. Throughout that time, she kept finding food to be a central issue. Food not being available, too much of the wrong kinds of foods, and mismanagement of food production were all central issues that affected the health of the environment and the lives of the people she was trying to inform. She stumbled into garden and farm education as a way to connect people with the environment through fostering a love of delicious, healthy food.

Christine received her Bachelor’s in Environmental Education/Interpretation from UW-Stevens Point in 2013 and has been slowly pursuing a Master’s in Sustainable & Resilient Food Systems, also through UWSP. Over the last several years she has been involved with Farm to School programs, small-scale organic farms, and food insecurity organizations and is thrilled to be a part of the VGI team!

When not in the garden you can usually find her hiking on the Ice Age National Scenic Trail, browsing the stacks at the library, prepping some meals at home or, when in doubt, check the local ice cream shops! 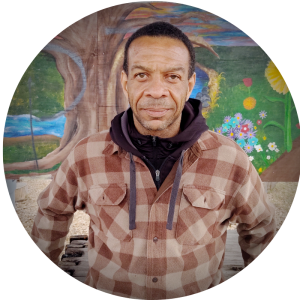 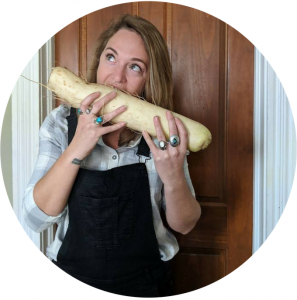 From a very young age Montana learned how to grow food by gardening with her mother. She went on to work at organic farms throughout Wisconsin and Illinois; from Bureau County, Shawano County to Ashland County and, of course, Milwaukee. Montana has volunteered for Victory Garden Initiative since its inception, growing prouder of her community as she witnesses an increasing number of vegetable gardens popping up all over the city. These gardens are often thanks to the Victory Garden Blitz!

Montana has a Bachelor’s in Social Justice and Agroecology, and a Master’s in Social Justice & Community Organizing from Prescott College. From creating and directing the only wet homeless shelter in Arizona, working to stop mine development on sacred indigenous lands, to aiding undocumented asylum seekers on the border of Arizona and Mexico, Montana has a broad passion for social justice, preferring to see things from a systems perspective. She believes that food is directly connected to a myriad of individual issues from physical and mental health of individuals, communities, and the environment, to modern slavery, economic monopolization, and the destruction of culture. She believes that her work with Victory Garden Initiative will make an impact in our community, and is especially thrilled to organize an event as impactful as the BLITZ!

Montana also loves dogs, rock climbing, paddleboarding, yoga, and dancing. She hula hoops in beautiful places and plays songs on the guitar so she can sing out of tune by herself. 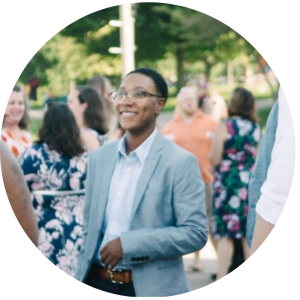 Jay Johnson is a Black, trans-masculine educator in Milwaukee. He joins Victory Garden Initiative as the Youth Programs Coordinator. Originally from the suburbs of Chicago, Jay relocated to Milwaukee for a year of service with City Year. He received his BS in geology from Wheaton College, but loves all things earth and environmental science.During his time at Wheaton, Jay held an internship geared towards empowering scientists of color and spent time working with a native tribe on preserving wild rice, a sacred crop. This is where he developed his passion to increase the number of people of color and queer people in the earth sciences.

Jay is a big fan of old school r&b and has curated an extensive record collection. In addition, he loves percussion instruments and enjoys spending an afternoon in a hammock. 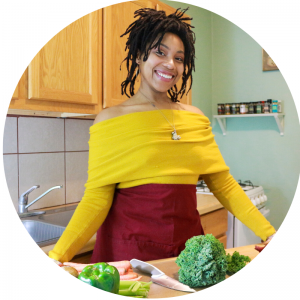 Joya Wade is a Community Outreach Coordinator at Victory Garden Initiative. She plans and produces events and classes at our Community Kitchen, Urban Farm, and throughout Milwaukee County. As a professional chef with more than 8 years experience, Joya has created recipes ranging from rich comfort foods, to nourishing plant based meals, to artisanal chocolate, and desserts! Her biggest passion in cooking is to “pair you with food that loves you back” since she is a firm believer in the healing nature of food cultivated and cooked with love.

When she’s not in the garden or behind a cutting board you can catch her cutting up the nearest dance floor, enjoying some yoga, or sewing in her design studio.

Alex Hunter is the compost assistant at our Victory Garden Urban Farm. Growing up in Waukegan, he learned how to work in the garden, yard and nursery alongside his parents who run a small landscaping business. Working the compost pile was always a fascination of his. He loved seeing firsthand the process of decomposition and the alchemical magic it worked when applied to the nursery stock and garden. Alex purchased a home with his partner in the spring of 2019 near VGI’s urban farm. He has been honing his composting skills in their new yard and is excited to now be working the pile for a sustainable local food network.

* These fields are required.